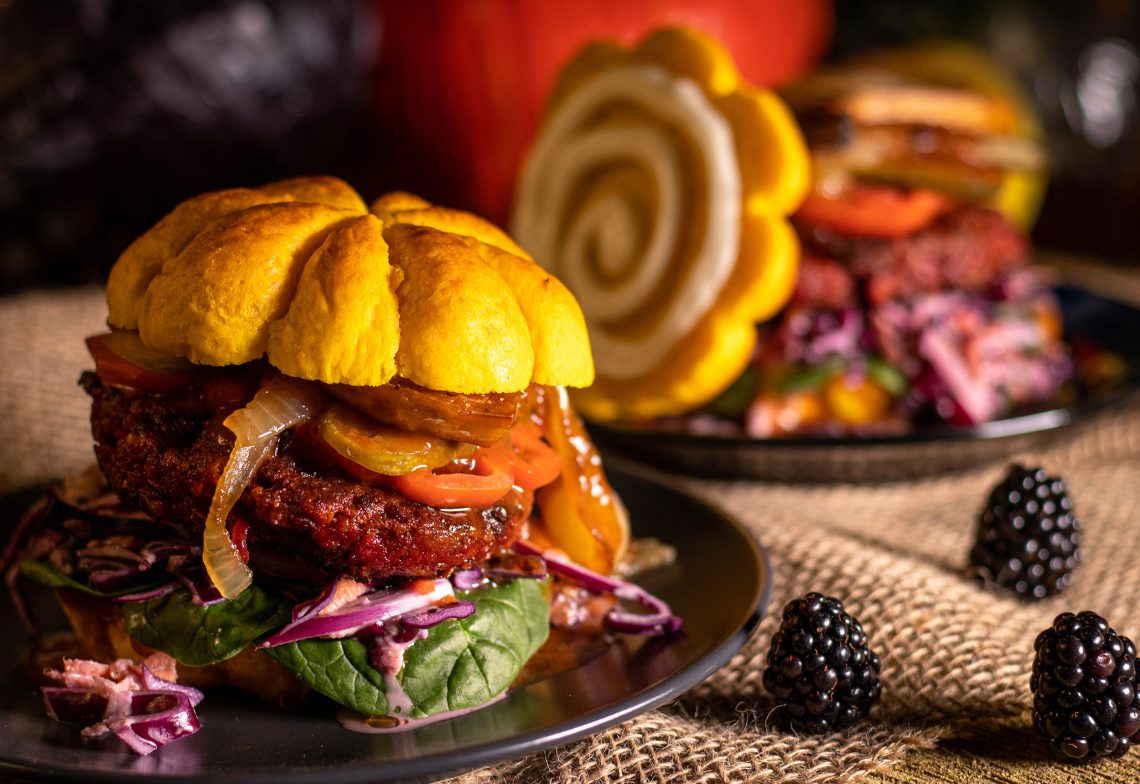 A burger that is tender, firm, meaty, aromatic and juicy. Simply delicious. And 100% plant based!
My vegan autumn burger comes in a soft pumpkin bun. The bun also has a neat pumkin shape. My hearty, tasty, meaty patty is made from seitan and soy, with autumnal mushrooms and beetroot in it. Whether this is a soy burger, mushroom burger or seitan burger is debatable. If you ask me, I believe mixing all of those just makes a grand patty! Topped with a dollop of mustard, aromatic gravy, crunchy baby spinach, juicy red cole slaw with blackberries in it, a fresh slize of tomato, caramelized onions, pickled cucumber, more gravy, fried king oyster mushrooms and some vegan mayonnaise.

Do I have to say more? Or do you want a bite?

Here is the recipe for my delicious vegan burger with lots of good regional and seasonal ingredients and plenty of protein in the patty. A great plant based meal! 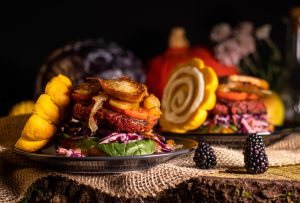 My hearty meat patty is made from seitan, soy, autumnal mushrooms and beetroot 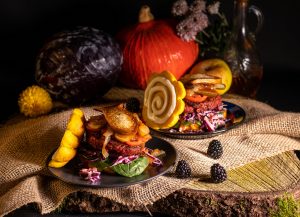 Topped with a slice of fried oyster mushroom 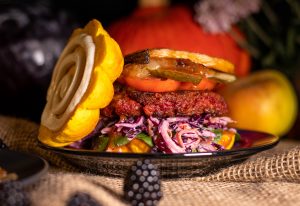 Whether this is a soy burger, mushroom burger or seitan burger is debatable 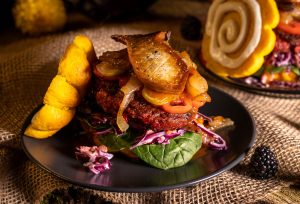 A seasonal burger with regional produce inside 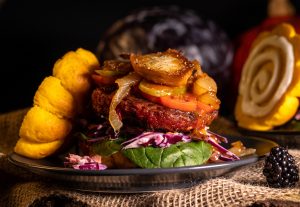 A burger that is tender, firm, meaty, aromatic and juicy 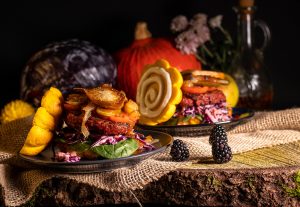 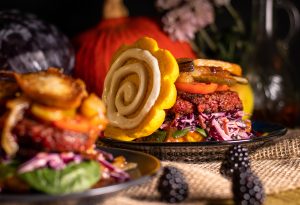 With homemade vegan mayonnaise and gravy 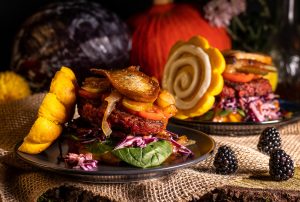 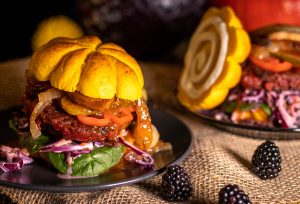 Here is the recipe for my delicious vegan burger 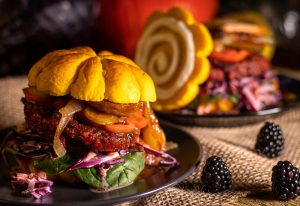 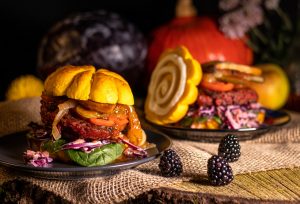 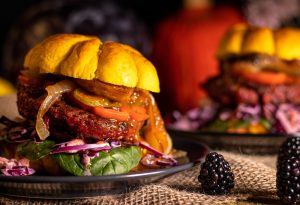 Do I have to say more? Or do you want a bite? 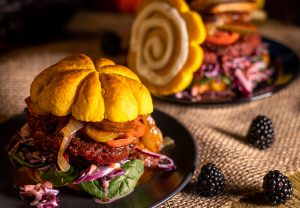 The bun also has a neat pumkin shape 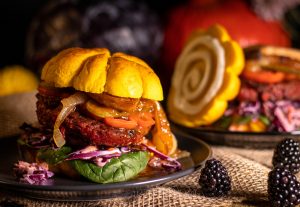 My vegan autumn burger comes in a soft pumpkin bun 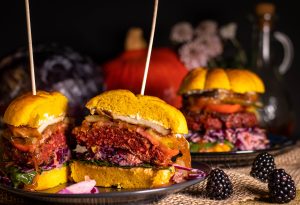 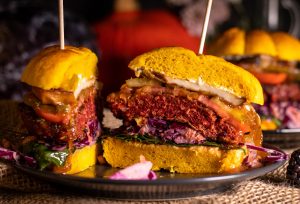 Topped with a dollop of mustard, aromatic gravy and some vegan mayonnaise 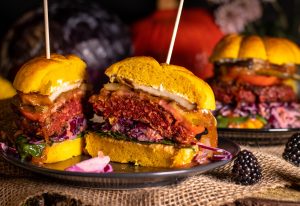 A meaty patty with cole slaw in a pumpkin bun

First I prepare the cole slaw so that it can soak and gain some flavour. It’s best to do this the day before or a few hours before epreparing the burgers. Just keep the red cole slaw in an air tight container in the fridge.

Mix the cabbage with the carrot, apple, blackberries, onions and chilli pepper. Mix the mayonnaise with the remaining ingredients in another bowl. Then pour the dressing over the salad, mix both well and season with salt and pepper. Then let it steep in the refrigerator for two hours or more. The red cole slaw stays well in the fridge for several days.

Mix the vital wheat gluten, tvp granules, mushroom powder and all dry spices together. Then stir in the crumbled toast, diced onion and king oyster mushrooms.

Puree the soy sauce, chickpea flour, sesame oil, BBQ sauce, gravy, beetroot, tomato pruree and the red food coloring together. Knead with the other patty ingredients, then let the patty mixture sit for 10 minutes. Afterwards gradually knead in the breadcrumbs until it is easy to form the mixture into firm patties. Let it sit again for a few more minutes.

Heat some oil in a pan over low to medium heat and slowly fry the patties on both sides.

Heat some oil in a pan. Fry the onions in it until soft, then stir in the salt. Continue frying until the onions are slightly brown. Finally, stir in the maple syrup and caramelize the onions.

Cut open the burger buns and add a dollop of vegan mayonnaise to the upper halves.
For the lower halves, I start with a small dollop of mustard, which I spread over the bun. Add 1-2 tablespoons of gravy, followed by a few leaves of baby spinach. Then I add 3-4 tbsp red cole slaw on top, afterwards the hot patty. Put a slice of tomato, about 1 tablespoon of caramelized onions, two slices of pickles and a little more gravy on top of the patty. Finish with a slice of fried king oyster mushroom. Add the upper half of the bun. Now the hearty, tasty, vegan autumn burger is ready to eat!

Did you enjoy this recipe?

If you'd like to treat me to a coffee. So that I can continue to develope recipes, cook them and take pictures to publish on dailyvegan.de, please send me a small Paypal donation.
I only ask you to do so, if you have enough money for yourself. If you have little money, I would like you to treat yourself to something. 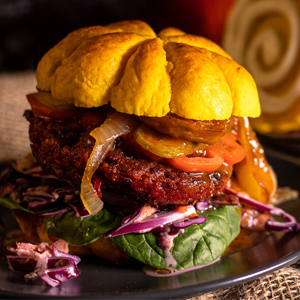 My name is Sean and I am a vegan chef. On dailyvegan.recipes I am showing you the immense diversity of vegan cuisine. Have a look at my recipes! 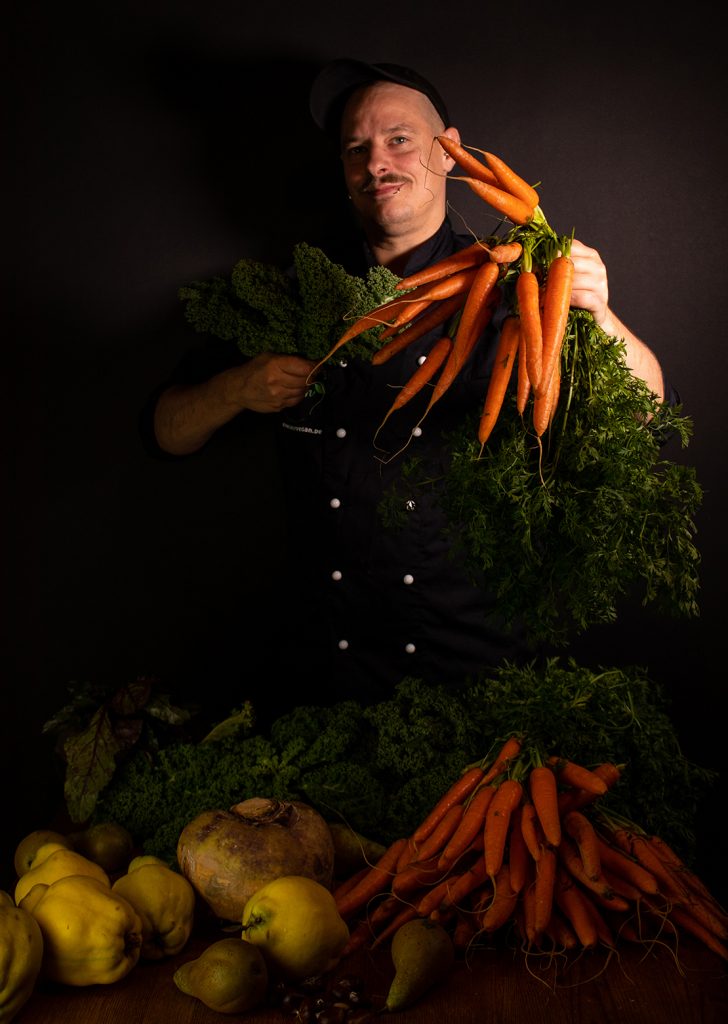 If you enjoy my recipes, I would appreciate a small donation via paypal. Please support dailyvegan.recipes, help to minimize it’s expenses for the pictures, the server and and the cooking and writing of the recipes.
Thanks!

Click here to get to all dailyvegan recipes published so far.

All recipes from a-z

This is where you can find all recipes on dailyvegan.recipes. From a-z.